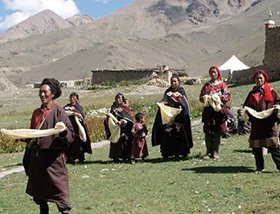 Though the district is divided into two regions Upper and Lower Dolpo, we can comprehend it in three parts: Upper, Middle and Lower regions according to the culture and traditions.

Upper region is inhabited by the Buddhist and Bon cults, whose culture and tradition resembles with Tibetans and they speak ‘Khaam’ very similar to Tibetan language but not the same. Actually the middle and the lower belt have a wonderful influence of different culture and traditions. The middle belt has typical culture with the essence of both the cultures and tradition i.e. Tibetan and Hindus. A very typical sect exists in some clusters within this area that is emerged from the Magar clan called Taralis (in local language) who has their own dialect called ‘Kaike’ that is not spoken anywhere else in the country. Lower most belt is inhabited by the people whose culture and tradition is mostly influenced by Hindus, people speak Nepali with different flavour that has the influence of Hindi. They use to talk with the wonderful expression of their hands.