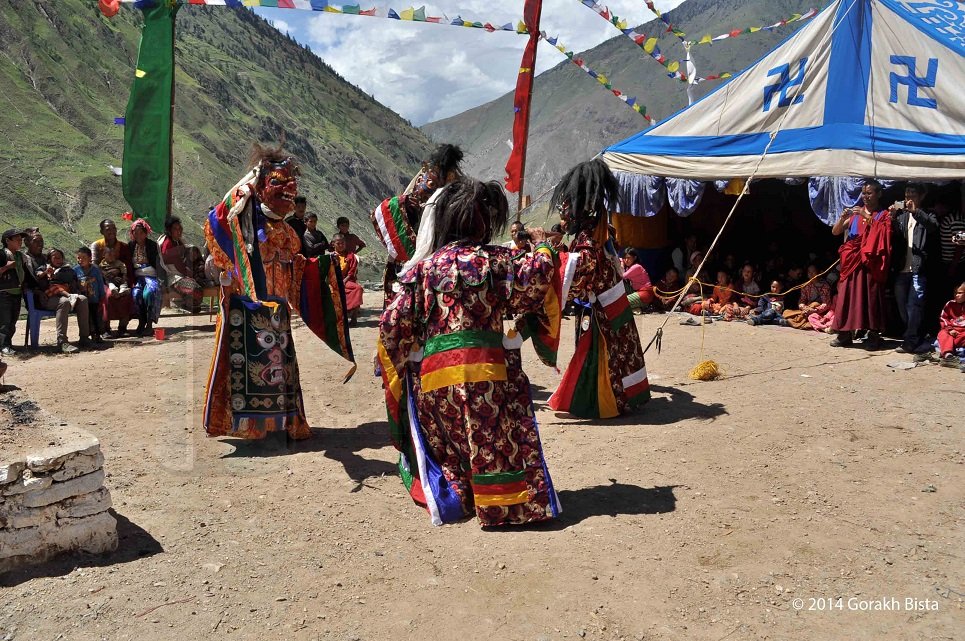 In several occasions, Dolpo has topped the list of fresh and unparalleled locations for Featured films and documentaries. In 1999 French director Eric Valli’s Himalayan Caravan not only exposed virgin boondocks of Dolpo, it also exhibited the unique culture of the people of Dolpo to the rest of the world. Similarly, in 2011 a film based on the most ancient religious belief Bon, was completed after four years of uninterrupted hard work in the lands of Bon followers. The movie named Bon: Mustang to Menri digs into the antediluvian myth of Zhang Zhung and Bon culture that have been preserved in the text and practical forms for geezerhood in Dolpo. The sacred land for Bons in Nepal, Dolpo practices the Buddhism prior to Buddha through oral didactics and most importantly, this exceptional phenomena of knowledge transmission of rarely found ancient dogma is unbroken for the ages. Though the modern Bon pretty much resembles the Tibetan Buddhism, the roots of pre-Buddha religious principles still are alive among the Bon adherents of Dolpo. Geshe Nyima Kunchap of Dunai, Dolpo was a great helping hand during the making of the movie. His role in assisting to investigate the significance of traditional medicinal practices of Tibetan origins, the ancient system of education in Tibetan influenced regions and guidance to treasure sites in Dolpo would be always admired by the core crew of the movie.

Bon is an indigenous religion of Tibet, which eventually arrived to the Himalayas of western Nepal with when the disciples of the religion migrated to Nepal via Tibetan border. 11th century religion of the Himalayas before Buddhism prevailed the region, Bon is sometimes considered as a religion opposite to Buddhism in several ways. The followers of Bon are referred as Bonpo, which is believed to be instituted by Tonba Shenrab. Bonpos are found in Tibet, China, India and Himalayan Regions of Nepal. Though Bon practitioners in Nepal these days converted themselves to Tibetan Buddhists, there are still many hamlets in western Dolpo where Bon prevails.

The movie plots a story of a 10-year-old kid Asonam, whose commitment to become a Geshe took him on the journey from his homeland, Mustang to Menri Monastery in Northern India. After 13 years of hardships while learning the principles of Bon principles Asonam returned to his homeland to preach the religion. Asoman had knowledge, skills and willingness to answer the questions of Bon followers in Mustang and Dolpo. Hence, the movie captured the amazing landscapes and unique Bon culture of Menri, Mustang and Inner Dolpo.

The sole trek operator to Dolpo we urge every trekker around the world to come and visit this amazing corner of the world where Tibetan ancient culture thrives and prospers outside Tibet.