“I won’t promise much but I would guarantee the most beautiful virgins boondocks of Dolpo, sightings of blue sheep and possibly the elusive snow leopard and authentic culture of Dolpo for you and your camera”– Gorakh Bista

There are several exciting places within the region of Dolpo which, has not been explored till now. The Gyaekochen is also known as the Dolpo peak (Gyaekochen ) that is more than 6000mtrs high. At the foothills of this magnificent peak, a beautiful Lake lies Gyaekochen. The Lake has been explored by only the team of Explore Dolpo led by one of our veteran photographer Gorakh Bista.

Mr. Bista says, the photography tour to Gyaekochen Lake is full of surprises. He claims that the natural landcapes throughout the trek are wonderful enough to feast the eyes and camera. One of the unexplored regions in Dolpo, Gyaekochen  Lake Photography trek with Explore Dolpo and Gorakh Bista is a great opprtunity to all the fellow trekkers who wishes to take as much as wonderful photographs of superb nature, unique culture and rare wildlife including the wide biodiversity of  floral and faunal species.

The photography trek to Gyaekochen Lake with Gorakh Bista, also takes you to the most fascinating highlights of Dolpo that include the culturally rich villages Saldang, Namgung and Shey. During the latter half of the trek it winds through the wonderful landscapes around Phoksundo Lake, halts for a short breather at the lake and winds up at Juphal. 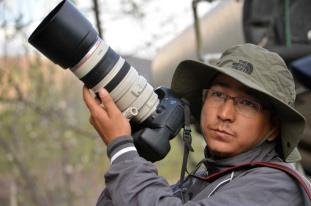 Born and brought up in Dolpo Mr. Gorakh Bista is a very well known photographer in the Nepalese Photography Industry. Ever since he began his photography career in 2005, he has experienced the mega events- photographing. While successfully handling the post of Director in Agora Creations since 2009, Mr. Bista also has shown his photography skills in the events like World’s Highest Cabinet Meeting at Kalapattar 2009. The same year he also covered the ground photography of world’s largest adventurous event the Everest Skydive. As a freelance photographer, his photographs are frequently featured in the National Dailies and weekly like Margadarshan Khabar Patrika, Nepal Weekly, Kantipur Nepali Times weekly, the Himalayan daily and Republica. He also has the experience of Wildlife Photography with Satya Media Arts and Collectives and regarding the experience with the international entity, he has was one of the photographers of Sherpa Outdoor Switzerland in 2012.

Apart from being an expert photographer, he is equally expert in making the contribution for his community. He was one of the facilitators to arrange the dialouge between Maoist Leaders and Government during the extreme insurgency. He has supported the orphans of Hridaya Group since 2008. His hard work has always paid him with the opportunities to work with global organization that includes UNICEF. His works has been recognized by the Prime Minister of Nepal and Nepal Tourism Board and hence he has been awarded with most prestigious awards for photography in Nepal.